Clear Creek Park opened in the late summer of 1996, as the first phase of a continuing building program.

In 2011, the Park District acquired an additional 27.7 adjacent acres to the east of the park.

Clear Creek Park has capabilities for up to 18 irrigated athletic fields of varying sizes. The fields are available for use by permit only. The Anderson Township Bicentennial Commission raised funds for part of the development.

Anderson Park District was awarded the prestigious “Management Innovation / Special Project Award” by the Ohio Parks and Recreation Association (OPRA), for “The Oasis” project. The project was chosen based on outstanding management creativity, interagency cooperation, and cost effectiveness.

In 1997, the Park District and 130 teens from the tri-state area youth of The Church of Jesus Christ of Latter-Day Saints, cooperated to raise ‘The Oasis’. The Oasis is an elevated, arbored framework housing concession and restroom facilities. The teens selected this project from a number of other possibilities during their annual youth conference.

Clear Creek Park is located in the flood plain of the Little Miami River Valley on State Route 32. Budget and construction obstacles were the concerns for the Park District. Building such amenities within a flood plain requires immense creativity to avoid the repeated expense of cleaning and repairing permanent restroom and concession facilities, following annual floods. The solution was to place portable trailers within an arbored framework, giving them a facade of permanence while allowing for quick removal with minimal warning time of rising waters. The cost effectiveness of the design, coupled with the assistance of the youth, made this project unique. The Oasis stands as the focal point of Clear Creek Park for everyone to enjoy, while serving as a permanent legacy of community involvement. The benefit to the community, as well as to those who helped build it, will last for many generations.

The first section of the Ohio River to Lake Erie Trail through Clear Creek Park was made possible by a matching grant from the Ohio Department of Natural Resources. Clear Creek Park serves as a trailhead on the Little Miami Scenic Trail, which is a section on the larger Ohio to Erie Trail, linking the Ohio River to Lake Erie. The Clear Creek Park link of the bike trail connects the Beechmont Levee and the Little Miami Golf Center. The Beechmont Bridge Connection Project will take the trail across the Little Miami Scenic River, tying it into the Lunken Airport Trail and Ohio River Trail to downtown Cincinnati. Trail partners include, but are not limited to: Great Parks of Hamilton County, Anderson Township, and Ohio Department of Transportation. Dogs are permitted on the trail and must be held on a 6′ leash at all times.

Permeable paver project was financed in part through a grant from the Ohio EPA. 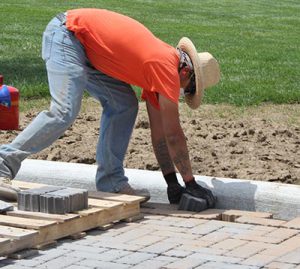